NEWPORT, R.I. — The Red Bull Foiling Generation Event was a significant departure from the norm for Olympic Development Program athletes Quinn Wilson and Riley Gibbs. The boats, the start, the course and the regatta format were all extremely different from the windward/leeward sailing that had been the focus of their campaign in the 29er skiff.

But rather than dwell on what they didn’t know about sailing 18-foot foiling catamarans—quite a bit, says Wilson—the two Southern California sailors went back to the basics and focused on keeping the boat moving and incrementally climbing the learning curve with each race. The end result was a come-from-behind victory in the United States Qualifier and a chance to face off against some of the best young sailors in the world this coming weekend in the Red Bull Foiling Generation World Final, which will be held Saturday and Sunday, October 22 and 23, off Fort Adams State Park in Newport, R.I. 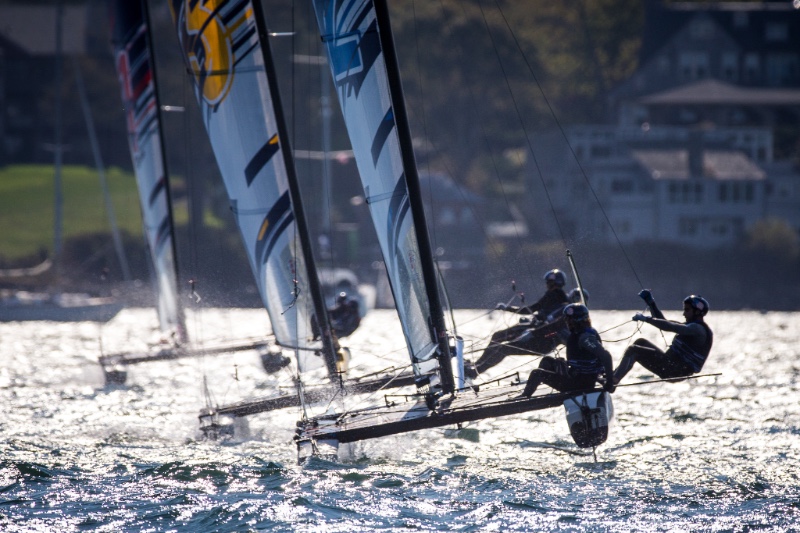 While the 29er can be a handful for experienced sailors, the foiling catamarans used for the Red Bull Foiling Generation are a step or two beyond the popular skiff in terms of speed and power. To quickly come to terms with the new craft, Wilson and Gibbs relied on the skill set they’ve developed as a part of the Olympic Development Program.

“We didn’t have a lot of time to train for the Red Bull event,” says Wilson, “But we put our time in when we needed to and made that training really effective. The ODP program helped us learn how to be efficient with our training.”

Another key was making the most of the coaching provided by Olympic champions Roman Hagara and Hans Peter Steinacher, who created the Red Bull Foiling Generation Event.

“It’s a different experience than the ODP, since with the ODP the coaches are coaching on everything they see,” said Wilson. “With this there was only a few coaches and a lot of kids, so it was hard to get that one-on-one time. It was important to get from the coaches what you needed for that next race and try to be coach-able when you got advice.”

Wilson and Gibbs’ regatta started off well, winning their first heat, but an equipment failure in their second heat pushed the duo into the repechage round where one bad race would’ve ended their regatta.

“It definitely put more pressure on us; it was a do or die situation,” says Wilson. “”But in some ways it was an advantage because we got to sail more on Sunday in those conditions. Entering the final we had more practice [than the two teams that qualified from the winners bracket].”

Wilson and Gibbs won four races in a row to qualify for the winner-take-all final race, and then blitzed the final to earn the spot in this weekend’s world final.

The dual elimination format isn’t used much in traditional sailing. But the pressure of racing with their backs to wall may serve Wilson and Gibbs well when they return to Olympic-class sailing.

“You’re going to need practice in situations where one race counts,” said Wilson. “The Red Bull Foiling Generation was a good opportunity to do just that.” 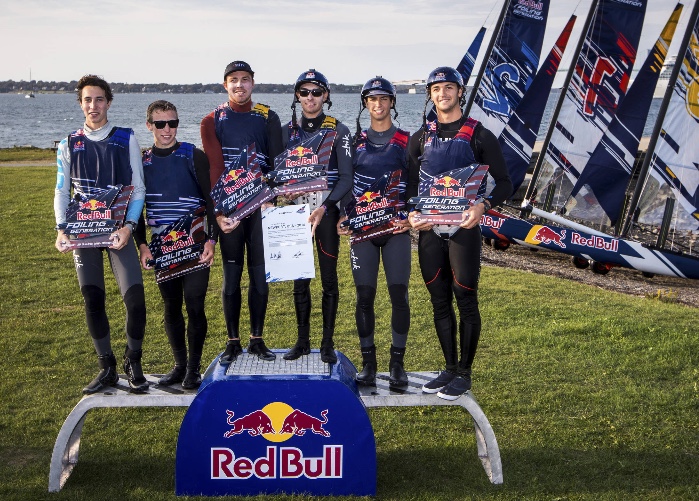 Wilson and Gibbs were far from the only Olympic Development Program sailors to shine at the U.S. Qualifier. Neil Marcellini finished second with Aiden Doyle while Luke and Nicolas Muller took third. The runner-up team from the repechage round, Romain Screve and Pere Puig, is a part of the ODP as are Maximo Nores, Raul Lopez, Ian MacDiarmid and Scott Ewing, all of whom showed well at the Red Bull event.

“Our focus at the Olympic Development Program is on developing talent,” says Leandro Spina, US Sailing’s Olympic Development Director. “Having the Red Bull Foiling Generation event in Newport is a great opportunity for some of our top talent in the United States to learn about foiling, an emerging aspect of sailing that will likely soon be part of the Olympic movement.”