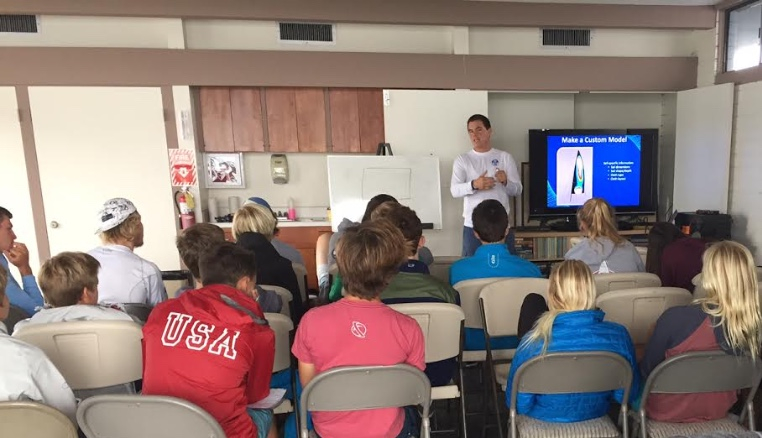 Thirty-one sailors in three classes gathered in Southern California, May 6 to 8, for an Olympic Development Program camp focused on sail trim. The classes represented included the Laser Radial (11 sailors), 29er (8 teams) and International 420 (2 teams). Guest coaches Mike Marshall and Jim Menzies joined regular ODP coaches including Grant “Fuzz” Spanhake, Kevin Hall and Mark Littlejohn, among others. The focus on the camp was sail trim, with both Marshall and Menzies contributing their perspective, and introducing some of the technology they use for designing sails and analyzing sail shape and performance.

As we’re getting closer to the peak events this summer, this camp featured a slightly smaller group than previous camps and an improved coach-to-sailor ratio. We were very pleased to shared with the sailors some the technology the top sailmaking companies use in their pursuit of boatspeed. As with every camp we run, the early May camp featured an excellent coaching staff including world champions, Olympians, and America’s Cup and Volvo veterans.
This camp was all about sail trim and boatspeed. Our goal was to use technology in training and match the “feeling” of the sailors with scientific data presented. We wanted to educate the sailors, inspire them to ask why things work, and what can be done at any given moment to get faster.
The energy at the camp, from coaches and sailors, was great. The trend of sailors engaging more and more at meetings, asking great questions, and challenging our coaching stuff continues. The sailors are speaking up on what they would like to see in 2017 from the Olympic Development Program. I am very pleased with our progress in this area
—Leandro Spina, Olympic Development Director

Coach’s Feedback
“We concluded a several years ago that the best way to fully develop the student-athlete was to create a paradigm shift in how we approached coaching. We needed a more systematic approach; one that would provide a wider net to capture the talented student-sailor and a way to get the professional sailor involved.
“The professionals have a wealth of knowledge and experience that is untapped. We want to tap into that vast resource effectively and efficiently. By bringing in elite professionals, we are beginning to raise the bar through exposing the talented kids and the better fleet coaches to professionals who have been there and know what it takes to get there. The professionals see firsthand, by being on the water and by sitting in on the briefings and debriefings, that they can provide timely one-on-one input to the coaches and kids in their fleets, as well as reach out to the larger group with presentations on specific topics where they have expertise.”
—Jim Menzies, Quantum Racing
“The approach the coaches took during this clinic made it fairly easy to determine if the sailors were acquiring knowledge. The sailors were never simply told the solution to a problem without also being given the reasons for it. This information greatly increased their ability to self-diagnose. More specifically, each time the coaches saw the need to make sail shape adjustments on a particular boat, they would go up to those sailors and ask them what they thought they could do to improve their performance. One key to this approach was to allow the sailors to correct themselves when needed. So if a sailor’s answer to how to improve performance was initially on the wrong track, the coaches would ask for an explanation as to why that proposed change would work. Upon trying to explain the change, the sailor would gradually realize why it wasn’t as useful as initially thought and what would work better instead. Towards the end of the clinic, in most cases, the sailors were able to answer this question correctly right from the start, showing that they had absorbed and could apply the information being taught.”
—Mike Marshall, North Sails

Athlete Feedback
“During the clinic, Mike Marshall gave an excellent presentation on sail shape. He started by reminding everyone of the basics of sail shape and how a sail works. He described tuning and the process of sail design in a way that made us rethink even our simplest settings with the aim of having the participants be able to understand their sails, and not just recreate a given setting.
“With everyone working toward the common goal of the Laser Radial Youth World Championships this summer in Ireland, all of the sailors spoke openly and shared their findings. I have no doubt that the competitive and encouraging environment that the program fostered will fuel the U.S. team to success this summer.”
—Henry Marshall, Laser Radial Sailor
“The way I rig my I420 has evolved from a very rigid following of the ‘rules’ laid out by coaches and setting guides to a more rounded toolbox of settings to always feel fast.
“At this camp I really learned a lot about the value of technology in the sport of sailing. We worked very hard to quantify the feeling of being slow, fast, over or underpowered.
“We used instruments to measure speed and heading on the water, but the majority of the data we analyzed in our nightly debriefs. We then applied the facts to the way we felt that day while we were sailing. Analyzing the trends to see what was consistently good or bad added a predictability into a sport that is often about feel. In racing we try to eliminate variables, so knowledge of how to properly set your sails in all wind and sea states is one of the first things that we like to work on.”
—Payton Thompson, International 420 Sailor